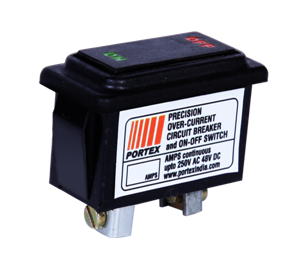 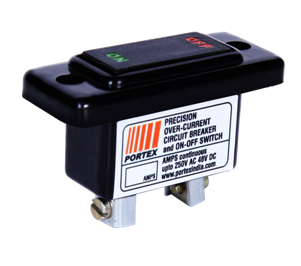 It is connected in series with the load and protects against over-current caused by any fault condition in the circuit or equipment, overload, misuse, voltage fluctuation, etc., by tripping and breaking supply when amps. load increases beyond maximum specified limit.

This Circuit Breaker is Patented in India and is fully designed, developed and manufactured in India. No Chinese components have been used.

Operating Mechanism: It has a reliable over-centre trip mechanism, actuated by a separate bimetallic heater system, housed in an insulated compartment. This design results in minimal heat loss and fast sensing of over-current, thereby, ensuring extremely rapid and accurate overload performance and complete safety during fault conditions. In the event of an overload, the normally closed contacts open with a “snap action” to interrupt the current, and the ON/OFF rocker switch moves to the OFF position. Pressing this ON/OFF rocker switch to the ON position resets the over-centre trip mechanism and restores the supply. 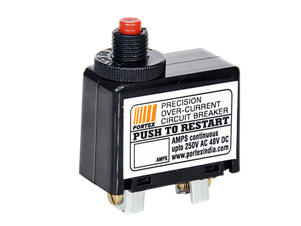 PORTEX Single Button Circuit Breaker is a single pole, precision thermal circuit breaker with a push to reset button on top. This circuit breaker has a threadneck panel mounting arrangement which can be fitted in any 9mm hole with the plastic knurled nut.

It is the same as the Rocker Actuated Circuit Breaker. The contacts open and close with a “snap action”. The push button clearly extends out when the circuit breaker trips and pressing it resets the trip mechanism and restores the supply.

Portex precision circuit breakers are thermally operated devices fitted with a bi-metal actuated tripping mechanism which function upon deflection of the bi-metal when it heats due to increased amps load. Several unique patented design features in our devices prevent dissipation of heat generated in the bi-metal, which is contained in a chamber. This results in increased sensitivity and consistent accuracy of trip current load.

As a result, Portex circuit breakers have the following tripping characteristics:

2. Since our circuit breakers are also designed to not trip at 5% current overload, i.e., they will hold and operate continuously at up to 5% overload of the rated current. This ensures that there is no nuisance tripping due to starting loads, in-rush currents, short duration overloads, starting surges or other short duration voltage fluctuations and load variations, which are self correcting and do not damage the equipment.

3. The time take to trip will depend upon 3 factors as follows:

Cold Condition: At cold condition, i.e., when the circuit breaker is switched on and the initial starting current is at 20% overload, then the tripping time will be longer as the bimetal has to heat up from cold condition.

Hot Condition: At hot condition, i.e., when the circuit breaker is already operating at the normal load current and then current increases to 20% overload, the tripping time will be short as the bimetal is already running hot.

4. In both the cold and hot condition, the trip current remains the same. Only the tripping time will be more when switched on from cold condition as compared to hot condition.

5. Data on the relationship between trip time and load, indicating upper and lower limits of tolerance within which the devices operate is presented in the below graph. 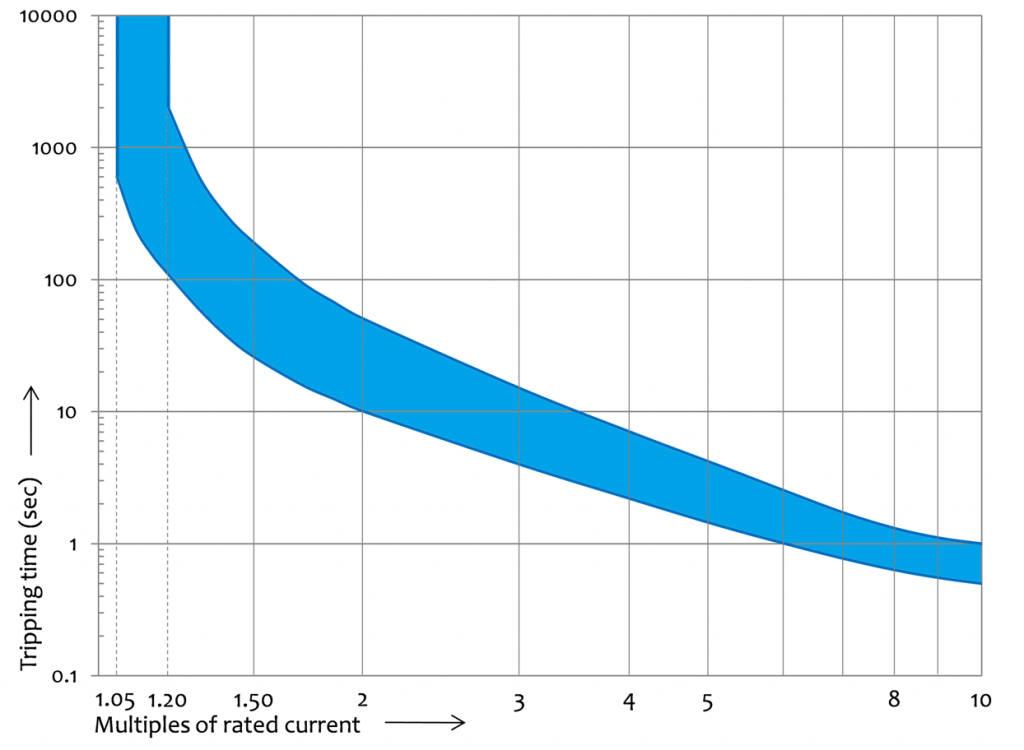